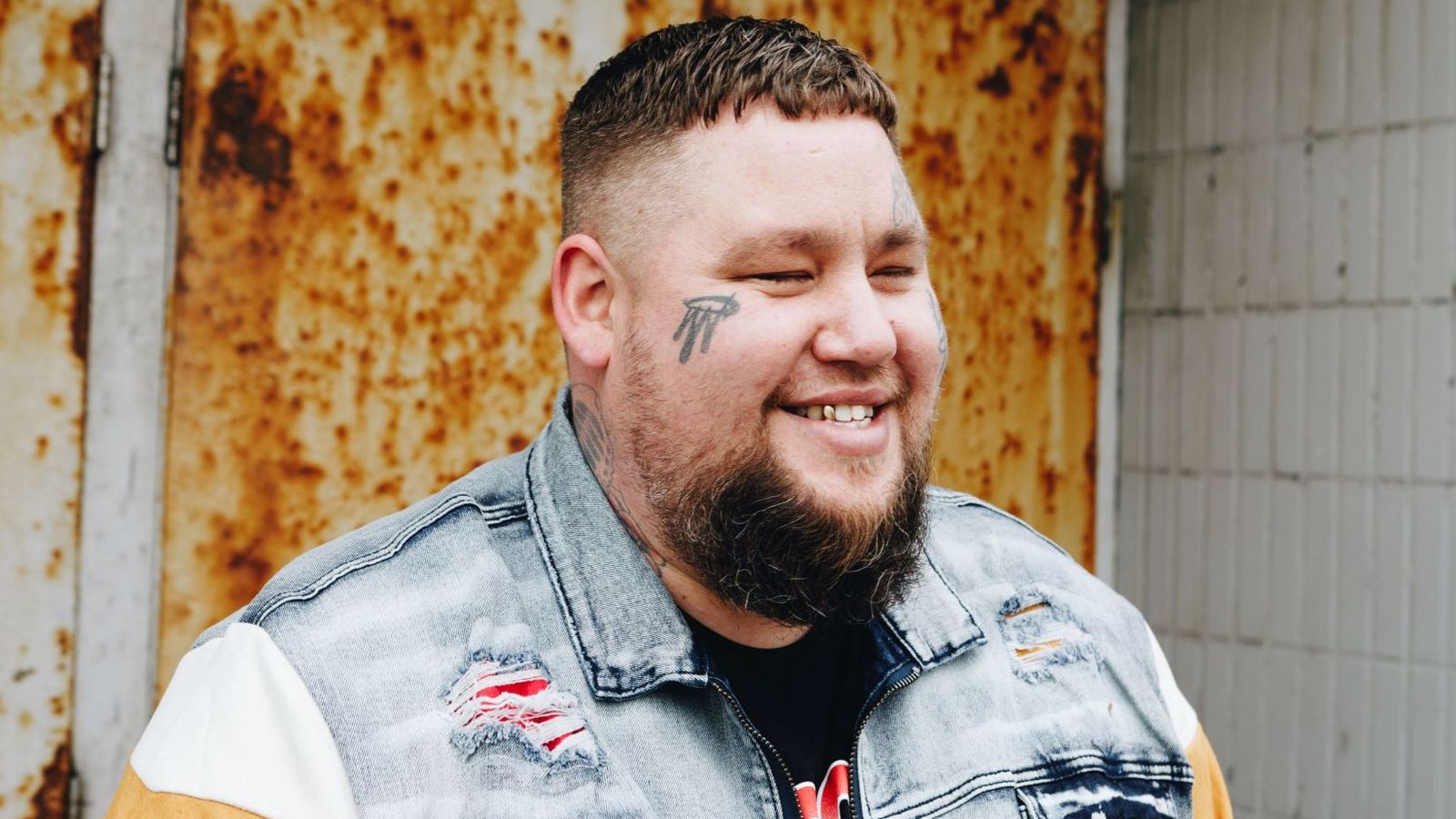 When Rory Graham, the artist better known as Rag’n’Bone Man, performed on stage at the Brit Awards earlier this year, he was wearing the same sunglasses as he is for our interview.

He needed them, he tells Sky News. Singing Anywhere Away From Here, his duet with Pink, in front of an audience filled with excitement and expectation for the first major live music event for more than a year in the UK – and alongside an NHS choir to mark the period in which health workers have saved thousands of lives and been pushed to their absolute limits – it was an emotional moment.

“I had these glasses on when I was doing that,” says Graham. “And by the end of the performance I was really fighting away tears. It was an amalgamation of stuff: being at the Brits performing, having Pink – not there, on screen, but it was amazing – and then also having this NHS choir. It was probably the most emotional thing I’ve ever done on stage. It was amazing but kind of difficult at the same time. I’ll never, ever forget it, it was a beautiful moment.”

Graham, who worked as a carer himself before his music career took off, working with people with autism and Down’s syndrome, can perhaps understand better than many what health and care workers have been through since the COVID-19 pandemic took hold. “That’s why I have such a profound respect for them,” he says, “and why it was so much more emotional having them on stage with us that night at the Brits.”

It has been a difficult time for the music industry, but slowly live shows are returning. Some festivals are going ahead – many, like the Brits, as part of government test events – and Graham recently played three back-to-back intimate shows at London’s Jazz Cafe in Camden, performing songs from his second album, the chart-topping Life By Misadventure, for the first time since its release at the beginning of May.

“It was really, really nice to be on stage,” he says. “It was really nice to be back with the band again. I mean, slightly strange having people sitting down the whole time and I got in trouble once for asking people to dance because you’re not allowed to do that, apparently.” You can’t stop people singing, though. “If I’m on stage singing and they’re not allowed, that would seem quite weird.”

Like millions of England fans around the country, Graham has been cheering Gareth Southgate‘s side on throughout Euro 2020. While it’s been “amazing”, he says seeing fans cheering from the stands only highlights the disparities in how different industries are being opened up once again.

“I guess everyone’s a little bit frustrated because they see on TV that everybody’s jumping up and going crazy at the football, but still live gigs, we’re not allowed to dance. So that part’s quite frustrating.” Is it unfair? “I think it’s undoubtedly unfair, because, you know, what’s more important? You can’t say one’s more important than the other. So, yeah, I think it’s time.”

To musicians, it feels like the government has neglected the arts, he says. “It feels like that to us because it feels like the arts are like last chance saloon. Everywhere else seems to be opening apart from the music industry, the live industry. So they need to hurry up.”

Graham has gigs in the diary and is keeping his fingers crossed, looking forward to performing to “a proper crowd” following the small shows. He is itching to showcase Life By Misadventure, the follow-up to the platinum-selling 2017 debut, Human, and lead single of the same name, which propelled him to fame. His life has changed quite a bit since then.

“Nobody knew that it was going to be the kind of phenomenon that it was,” he says. “I mean, one week we were just slowly releasing stuff and then the next I had friends calling me up from different countries all over the world saying, you’re playing on the radio and… it hit so fast, you know, that it really, totally changed my life in a very short space of time. I had a career before Human, it was a living, but it changed so much. It went from like, ‘oh cool, I’m playing to a thousand people in Brighton’, to ‘I’m playing to 12,000 people in Paris’. It really did change stuff forever.”

Now in his mid-30s, Graham is glad fame and the success didn’t happen earlier in life. “I don’t know if I would have been mentally capable of dealing with that. In fact, I know I wouldn’t have been. So I’m glad I was a bit older…

“I probably just would have partied myself to death, I reckon. I feel like I’d already done quite a lot of that stuff so I had my feet kind of firmly pressed on the ground and I wasn’t in a position to believe my own hype or anything. I think going through that stuff, travelling the length of the country with a guitar on your back or doing shows for beer, those things make you appreciate the bigger things.”

Since Human made him a household name, Graham has been through a lot in his personal life. He married his long-term girlfriend and mum to his three-year-old son, Rouben, in 2019, but the couple split up not long afterwards.

The title of his second record, Life By Misadventure, sums it up, he says. “All the songs seem like a kind of timeline. I’ll talk about a lot of stuff from my childhood and adolescence and how my teenage years were quite wild. But also, around the time that Human happened, it was a crazy few years and then I became a dad… so I kind of went through a lot of emotions and went through trying to grow up a bit quite quickly and be more responsible. So… the title, it makes sense to me.”

Graham was determined not to make a break-up record, he says; just one song on the album, Talking To Myself, addresses the split. Instead, many of these songs were inspired by other people’s struggles.

“Must be a thousand times she told you, that your body’s getting oldеr, don’t you know?” he sings on new single, Alone, which came about following a conversation with a female friend about the pressure of the biological clock. It is perhaps an unusual subject for a male singer to tackle, but Graham says he felt compelled to address the different ways men and women are treated when it comes to having children.

“It just seems like a problem that men don’t have, I’ve never had that pressure put on me,” he says. “It seems that a lot of women go through those kind of pressures from family or friends or whoever it is, who say, like, ‘isn’t it about time to settle down?’ ‘When are we going to get grandchildren?’ Those kinds of things. It just seemed a bit archaic. I’d never really written a song like that, it was kind of hard to put into words at first, but I think it came out well. I think hopefully people will understand it.”

Graham is enjoying being a dad and the time lockdown has given him with his son. He has spent the day in the garden with Rouben and is getting ready to take him swimming, he says, after the interview. But lockdown has also taught him that he needs to keep busy. “I learnt that I’m not necessarily great with a lot of free time. I like to work.”

He has discovered a new found love of baking, however, so cakes have kept him occupied. “My son enjoys cakes, like a lot of three-year-olds do. So we got into making all sorts of different kinds of cakes, I’ve kind of become quite good at baking, which is not necessarily a bad thing.”

It sounds like Celebrity Bake Off could be on the cards.

“If they want me, I’ll be there,” he says. “I don’t really like the idea of reality shows, but I reckon I’d give Bake Off a go. If Big Narstie can do, I can do it.”

But before Paul Hollywood and co come knocking, Graham is hoping more than anything to get back on stage properly. When those big gigs, to big crowds of people able to sing and dance and hug once again, just like the Brits, it’s going to be “incredibly emotional again”, says Graham.

“I feel like the Road Runner at the moment, just on the spot. But we’re all just so ready to do it. We’re ready to go.”

Rag’n’Bone Man’s new single, Alone, and album, Life By Misadventure, are out now