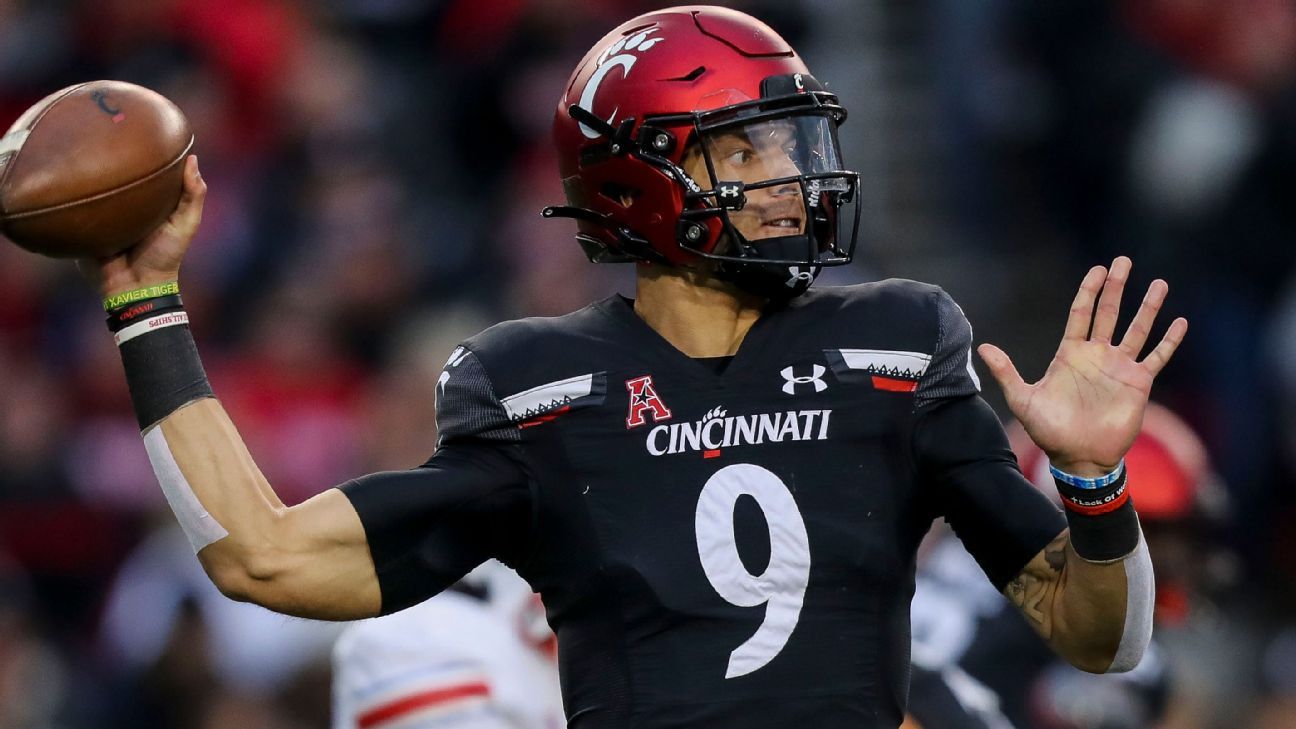 For the first time in the eight-year history of the College Football Playoff, a team from a Group of 5 conference has cracked the top four in the selection committee’s rankings, which would assure it a spot in one of the two semifinals games on New Year’s Eve.

Cincinnati, one of just three undefeated teams left in the FBS, is ranked No. 4 in the latest rankings that were released on Tuesday night, behind No. 1 Georgia, No. 2 Ohio State and No. 3 Alabama.

Michigan is No. 5, followed by Notre Dame, Oklahoma State, Baylor, Ole Miss and Oklahoma. The selection committee’s final rankings will be released on Dec. 5.

The Bearcats jumped one spot after Oregon, which was No. 3 in last week’s rankings, lost 38-7 at Utah on Saturday. The Bearcats blasted SMU 48-14 at home in one of their most impressive performances of the season.

“I think it’s awesome, for our entire team, our community, our campus. But we stress to the guys, that we have a ways to go,” Cincinnati coach Luke Fickell said on ESPN’s rankings release show. “But the excitement about it, is well deserved for a group that’s fought hard all year.”

Cincinnati plays on the road at East Carolina on Friday (3:30 p.m. ET, ABC and ESPN App) and then will play No. 24 Houston in the AAC championship game on Dec. 4.

“Most people have heard that we don’t talk about separation. Cincinnati, we’ve talked a lot about the win at Notre Dame, and it continues to look better,” selection committee chair Gary Barta, the athletic director at Iowa, said on the show. “And this past week, against SMU, they played very well. So, Cincinnati at four, the committee felt strongly about.”

After Week 1 of the process, Cincinnati seemed like the least respected of the contenders. But times have changed, especially with the win over the Mustangs.

“During the week, I thought we had a little more energy, and it was Senior Night, too,” Fickell said about the team’s preparation for SMU. “Trying to figure out the mindset of an 18- to 22-year-old, you never know. It all just kind of came to a head, and they had a lot of focus.”

It definitely resonated with the committee.

“We’ve had a lot of respect for Cincinnati all year,” Barta said. “But this win against SMU, the way they played offensively and defensively, we had a lot of opinions, but they came in at four.”

Barta was also asked about the breakdown at Nos. 2 and 3 for two CFP staples, the Buckeyes and the Crimson Tide.

“Two great teams, both Ohio State and Alabama. This past week, though, (Ohio State’s) dominating win over Michigan State got the committee’s attention, and the defense is playing much better,” he said. “When the vote came down, Ohio State came in ahead of Alabama.”

With Michigan and Notre Dame not far behind of course, and the committee seems to be following the Irish closely.

“Notre Dame has been building momentum all year,” Barta said. “They are a terrific team, and they are highly thought of by the committee.”

But the news of this week is Cincinnati.

“We try to preach to them, to not allow the outside noise to affect us, and try to somehow find a way to enjoy what’s going on,” Fickell said. “We try to take their minds into what they need to do, and not focus on what other people think they need to do.”

Ohio State, which suffered its only loss of the season to Oregon at home on Sept. 11, moved ahead of Alabama, the defending national champion, after another impressive performance this past weekend. The Buckeyes routed Michigan State 56-7 at home, scoring touchdowns in each of their seven first-half possessions. Ohio State has won nine consecutive games heading into Saturday’s road contest at Michigan.

The Crimson Tide dropped one spot from last week’s ranking after another so-so performance in a 42-35 victory against Arkansas at home. It was Alabama’s second close call in the last three games; it defeated struggling LSU 20-14 at home on Nov. 6.

Oregon and Wake Forest fell eight spots after ugly losses last week, while Michigan State dropped five. Utah moved up four spots, and Clemson joined the rankings for the first time after a 48-27 win against the Demon Deacons.