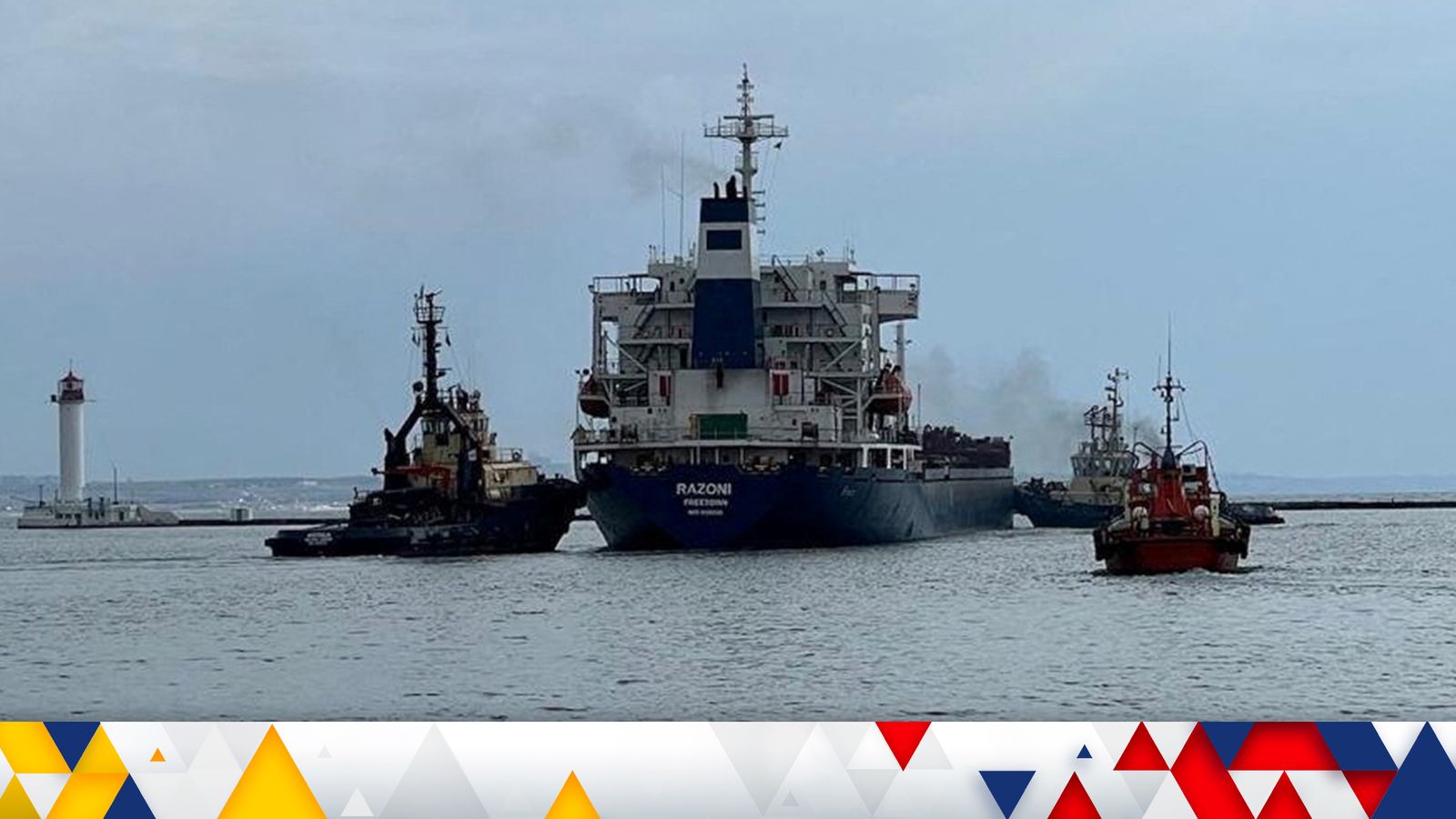 A ship loaded with grain has left the port of Odesa for the first time since the war began, the Ukrainian infrastructure minister has said.

“Thanks to the support of all our partner countries & UN we were able to fully implement the agreement signed in Istanbul.”

Meanwhile, one of Ukraine’s richest men, a grain merchant, was killed in what Ukrainian authorities said was a carefully targeted Russian missile strike on his home.

Oleksiy Vadatursky was the founder and owner of Nibulon, which specialises in the production and export of wheat, barley and corn and is headquartered in the port city of Mykolaiv – to the east of Odesa.

The Sierra Leone-flagged dry cargo ship Razoni is loaded with 26,000 tons of corn and left the port of Odesa at around 9.30am (7.30am UK time) on Monday to go to Lebanon, Mr Kubrakov said.

The vessel will be inspected in Istanbul before continuing to Lebanon’s Tripoli.

Russia and Ukraine signed separate agreements with Turkey and the UN clearing the way for Ukraine – one of the world’s key breadbaskets – to export 22 million tons of grain and other agricultural goods that have been stuck in Black Sea ports because of the conflict.

Another 16 ships are waiting to depart Ukraine’s ports through safe corridors in line with deals signed in Istanbul, Mr Kubrakov said.

The agreement aims to allow for the safe passage of grain shipments in and out of Odesa, as well as Chornomorsk and the port of Pivdennyi nearby.

A UN-led command and control centre in Instanbul to monitor vessels is part of the deal, which includes checks on inbound and outbound vessels to make sure only grains are being moved, as well as a commitment from Ukraine and Russia not to attack the ports or merchant or other civilian ships.

“Russia has felt the full weight of global pressure and the eyes of the whole world will now be watching to see if they continue to weaponise global food supplies as they have been until now,” she said.

“These ships must receive safe passage. There must be no repeat of Russia’s shelling of the port of Odesa.”

The World Food Programme is also planning to purchase, load and ship an initial 30,000 metric tonnes of wheat out of Ukraine on a UN-chartered vessel, according to the UN. 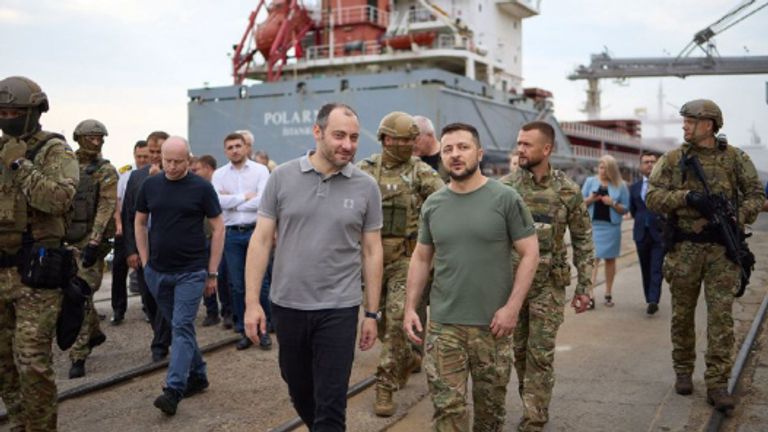 A blockade by Russia’s Black Sea fleet since it invaded its neighbour had cut off supplies to markets around the world and sent grain prices soaring.

Many people in the world’s poorest regions rely on shipments from the Black Sea for food.

Moscow has denied responsibility, blaming Western sanctions for slowing its own food and fertiliser exports and Ukraine for mining its Black Sea ports.

Ukrainian President Volodymyr Zelenskyy said Ukraine’s harvest could be half its usual amount due to the conflict.

He called the killing of Mr Vadatursky a “great loss for all of Ukraine”.

“It is these people, these companies, precisely the south of Ukraine, which has guaranteed the world’s food security,” he said.

The businessman’s net worth was $430m (£350m) in 2021, according to Forbes, and he had been building a modern grain market with a network of transshipment terminals and elevators. 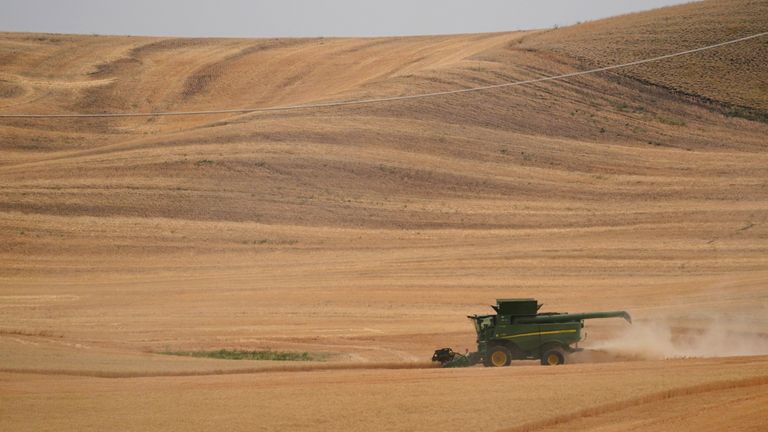 In Mykolaiv, Mayor Oleksandr Senkevych said more than 12 missile strikes, likely the most powerful on the city so far, hit homes and schools, with two people confirmed killed and three wounded.

Russia suffered its own setback after a small explosive device carried by a makeshift drone blew up on Sunday at the headquarters of its Black Sea Fleet in the Crimean port city of Sevastopol.

Ukraine did not immediately claim responsibility – but the seemingly improvised, small-scale nature of the attack raised the possibility that it was the work of Ukrainian insurgents trying to drive out Russian forces.

Beaten, tortured and in hiding: British Army Afghan interpreter’s year on the run from the Taliban
‘Don’t use restrictions on girls’ education against us’, says senior Taliban leader
Why the U.S. is struggling to modernize the electric grid
‘You’ve got to eat’: Energy bills are squeezing businesses and people as UK costs soar
NASA’s Artemis 1 Space Launch System Moon Rocket Rolls Out for Launch on August 29