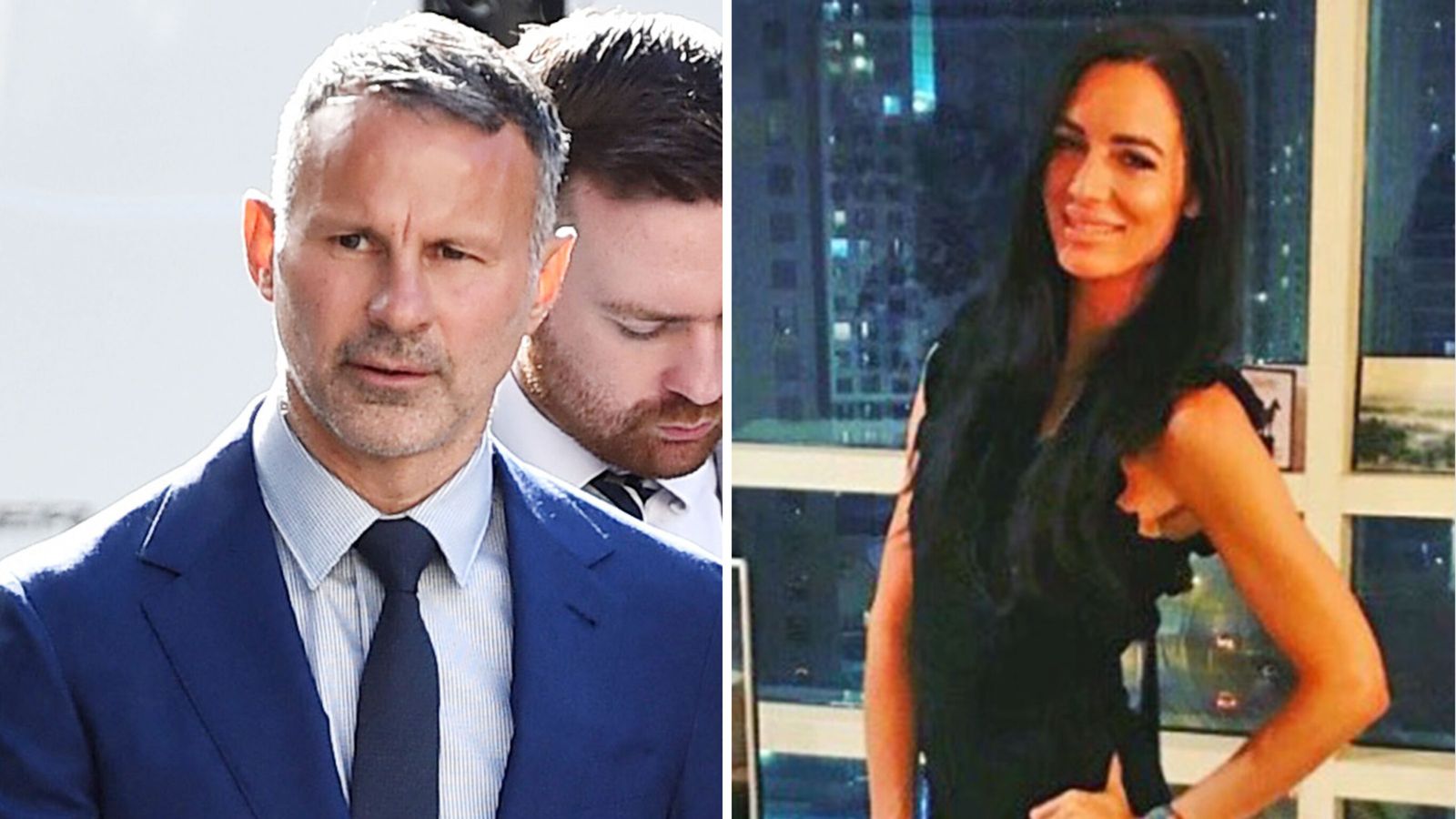 “Distressed” Ryan Giggs had “tears in his eyes” when he knocked on his neighbour’s door wearing his slippers on the night he allegedly headbutted his ex-girlfriend, a court has heard.

Linda Cheung said the former Manchester United star asked her to call the police when he turned up at her property on 1 November 2020, and when he revealed Kate Greville had accused him of cheating, she told him: “Oh Ryan, not this again.”

Giggs is standing trial accused of using controlling and coercive behaviour against Ms Greville, as well as assaulting her and her sister Emma.

He denies the charges against him.

Read live updates from the trial as they happened

Giving evidence on the sixth day of the trial, Mrs Cheung – who described Giggs as a “friend” as well as a neighbour – said she heard “loud banging” on her door on the night of the alleged assaults.

She told the jury that Giggs asked for help and “said words to the effect that Kate had been accusing him of seeing other women and he wanted me to go over and sort her out”.

Mrs Cheung said her initial remark to him was “‘Oh Ryan, not this again”, in response to the cheating claims.

She then told the footballer: “I can’t help because I don’t know what’s happened”, the court heard.

Mrs Cheung said Giggs asked her: “Can you call the police? She’s got my phone. She won’t leave.”

The neighbour told the court she refused to call the police and instead offered to let Giggs use her phone but he looked at her and “didn’t say anything”.

Mrs Cheung added that Giggs “looked in distress” so she offered to let him enter her property or suggested that he lock himself in one of his bedrooms.

“I could feel my heart rate pounding,” she said.

“What can I do to help him without fuelling the situation?”

Giggs then walked away from Mrs Cheung’s property towards his house, the court heard.

In a statement to police, which was read to the court, Mrs Cheung said Giggs had “tears in his eyes” during their conversation.

She told the court: “He was at my door virtually crying.

“He never went outside with his slippers on.

“I was thinking it must be urgent. He’s come out of the house in the rain in his slippers.”

Mrs Cheung said Ms Greville, her sister Emma and a male returned to the house after 1am and were “screaming, shouting, laughing, running up and down my drive” with the dog.

Earlier, Emma Greville alleged that Giggs threatened to headbutt her after he elbowed her in the jaw and attacked her older sister Kate.

Giving evidence from behind a screen in court, Ms Greville said she heard “shouting, arguing and scuffling around” from another room in Giggs’s property when she discovered the footballer lying on top of her sister trying to grab her phone.

“From her facial expressions I could tell she was in pain,” Ms Greville said.

“Kate said ‘get him off me’ so I put both my arms around his waist and as Kate was using her legs to push him off I was pulling.

“As I was pulling him up he was standing upright in the doorway. He turned to his right and his elbow touched my jaw and as a result I let go. Not in a gentle manner, it was a ‘get off me’ manner.”

Ms Greville said she then saw Kate in the kitchen as her sister tried to retrieve her phone from Giggs’s back pocket.

She told the court: “I said to Ryan ‘just give her phone back and then we will go’.

“I also said to him ‘I saw you on top of her, grab her phone so I know you have her phone’.

“He had gone from annoyed to extremely angry.

“He put both his hands on Kate’s shoulders and with lots of force used his head to headbutt her in the lip.

“She fell to the ground screaming and covering her face.

“Afterwards he told me it was my fault he had headbutted Kate and turned to me and said ‘I will headbutt you next’.

“I felt fear because he had headbutted Kate so why would he not do the same to me.”

Meanwhile, Kate Greville’s boss told the court that her company had to block Giggs’s “intense” emails.

Giving evidence via a video link from Dubai, Elsa Roodt said her PR business had “no other option” but to take the action because Ms Greville “couldn’t do her work”.

Ms Roodt told the court she asked Ms Greville about bruising on her arm in Dubai in 2017 and she said it was from “rough sex”.

The witness also described seeing Ms Greville with bruises on her arm after an incident in February 2020.

Ms Roodt said: “She said Ryan had got physical with her the night before in the hotel room.”

The court heard Ms Greville is currently a managing partner in the UK branch of Ms Roodt’s business.

The trial at Manchester Crown Court was adjourned until Tuesday.