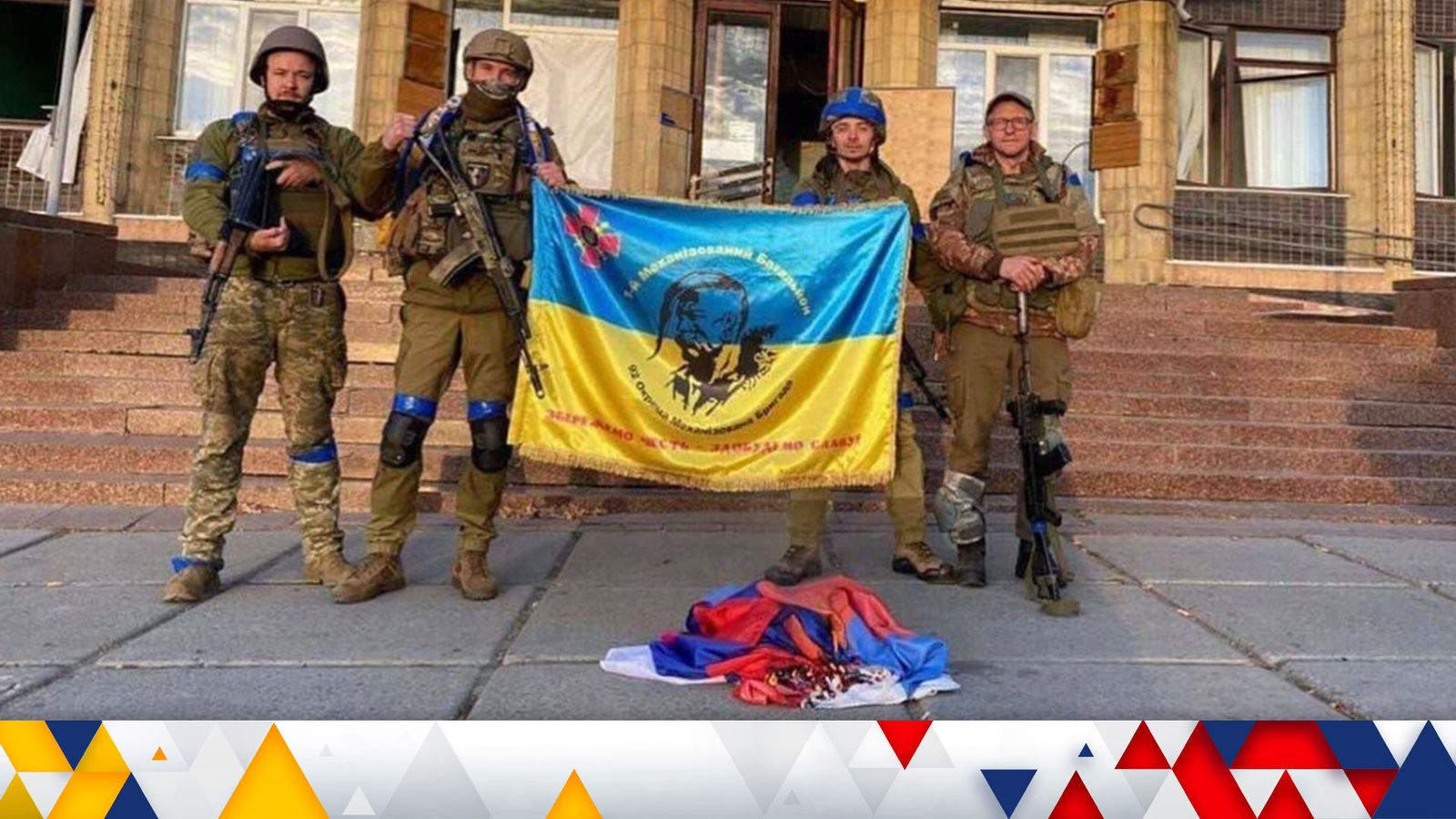 Russia has ordered its troops to withdraw from two front line positions in eastern Ukraine in the face of a shock advance by Ukrainian forces.

The retreat on Saturday marked the most significant gain for Ukraine‘s military since they defeated a Russian attempt to conquer the capital, Kyiv, back in March.

“The Russian army in these days is demonstrating the best that it can do – showing its back,” Ukrainian President Volodymyr Zelenskyy said in a video released by his office Saturday night.

“And, of course, it’s a good decision for them to run.”

Ukrainian forces, backed by increasingly powerful Western weapons, have captured hundreds of square miles of territory from Russian control in the past four days across the Kharkiv region, as the Russian line collapsed.

Mr Zelenskyy said Ukraine’s military had liberated around 2,000 square kilometres of territory since the counteroffensive started.

Analysis: How Ukraine blew a hole in Russia’s defences

Images on social media showed triumphant soldiers replacing Russian flags with the colours of yellow and blue in villages, towns and cities as they fell back under Ukrainian control after months of Russian occupation.

A top Ukrainian commander said more cities would follow as he watched a flag-raising ceremony, accompanied by the national anthem, at the small city of Banakliia, which was one of the first to be recaptured.

“I am sure that this is not the last city,” Colonel General Oleksandr Syrskyi said, dressed in full combat gear.

Pictures have emerged of the Ukrainian flag flying over Kupiansk, which had been an important logistics hub for Russia to send supplies to its troops in the crucial southeastern Donbas region.

Images have also been posted of social media of Ukrainian troops at the gateway of Izyium – the main bastion for Russian forces in the area. It was a city was that captured by Russia during the first weeks of the war and had remained under Russian control ever since – until now.

Explaining the Russian withdrawal, defence ministry spokesman Igor Konashenkov said Russian troops would be regrouped from the Balakliya and Izyum areas to the Donetsk region in the Donbas.

Mr Konashenkov said the move is being made “in order to achieve the stated goals of the special military operation to liberate Donbas”.

The claim of a pullback to concentrate on the Donbas is similar to the justification Russia gave for withdrawing its forces from the Kyiv region and the north of Ukraine earlier this year. That came after they encountered fierce Ukrainian resistance, helped by Western weapons.

The developments came amid what has largely been a media blackout regarding Ukraine’s offensive plans.

The Ukrainian military said it had launched a long-anticipated counter-offensive against Russian-controlled territory in the southern region of Kherson on 29 August.

It has blocked access for journalists to the front line, so progress of that operation has been hard to gauge.

In the past few days, however – the UK Ministry of Defence said that the start date was 6 September – Ukrainian forces have simultaneously started attacking Russian-held positions in the Kharkiv region.

Claims of significant advances in Kharkiv began to emerge in the past three days.

Vladislav Sokolov, the head of the Russian-appointed local administration, said on social media that authorities in Izyum have started evacuating residents to Russia.

“It will be like an avalanche,” he said, predicting a Russian fallback. “One line of defence will shake, and it will fall.”

GE to work on converting old, gas-fired power station in Britain into a battery storage facility
A lesson from ‘Reaganomics’: Collision of theory and reality could prove fatal for PM and her party
Hurricane Ian strengthens and set to make landfall again – number of deaths in Florida is uncertain
Nations demand urgent meeting with Kwarteng as Tory top team doubles down on plan to cut spending
Vestas launches ‘world’s tallest onshore tower for wind turbines’