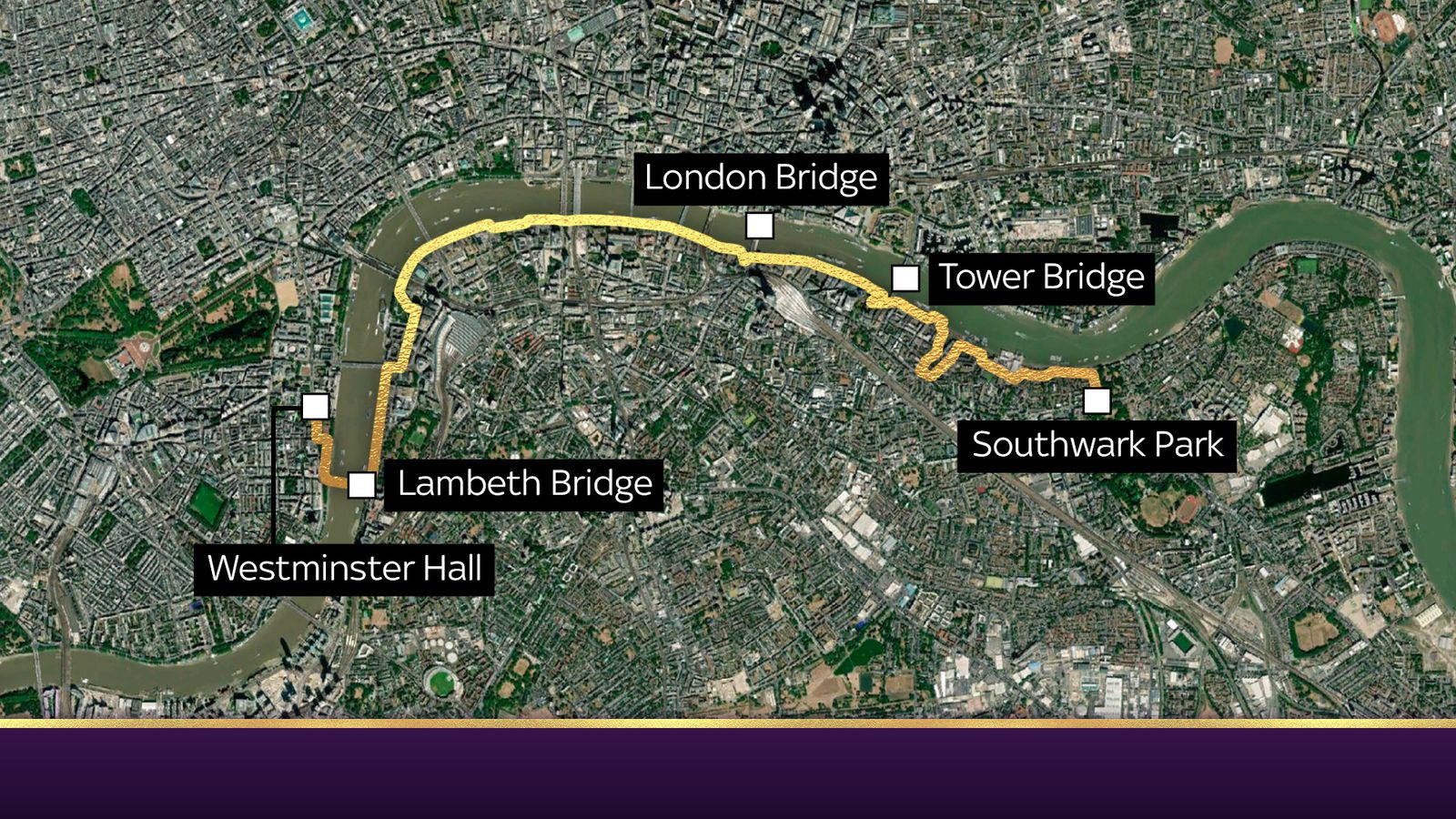 The route for people queuing to see the Queen lying in state at Westminster Hall has now been revealed by the government.

The line will start on the Albert Embankment, next to Lambeth Bridge, before snaking down the River Thames to Southwark Park – a distance of more than four-and-a-half miles.

Members of the public will pass famous landmarks during their wait, including the London Eye, the National Theatre, Tate Modern and HMS Belfast.

Earlier in the week, officials announced what items people could and could not bring with them. Now, further information has been released, with hundreds of thousands of mourners expected to pay their respects.

• Extra toilets and water fountains along the route
• Southbank Centre, National Theatre and BFI Southbank extending opening hours to provide refreshments
• Cafes and other local businesses set to also open longer
• More than 1,000 volunteers, stewards and police will be on hand
• BFI Southbank will have outdoor screen to show archive footage of the Queen

The Queen will lie in state from 5pm on Wednesday for four full days.

She will remain in Westminster Hall until 6.30am on the morning of her funeral on Monday 19 September, and the doors will stay open to the public 24 hours a day in that time.

Mourners who wish to file past have been warned of lengthy waits in the queue and there will be strict bag restrictions.

Those waiting in line will be issued wristbands with their number in the queue – allowing them to leave temporarily to use nearby portaloos or buy supplies.

Regular updates on queue length, the estimated wait time and when it closes will be provided on government social media accounts.

The Queen’s coffin will be moved from Buckingham Palace to Westminster Hall on Wednesday, where it will be raised on a catafalque and draped in the Royal Standard, with the Orb and Sceptre placed on top.

It will be guarded by a vigil of units from the Sovereign’s Bodyguard, the Household Division or Yeoman Warders of the Tower of London, and from 5pm mourners will be able to walk past to pay their respects.

The entire route has step free access. However, a separate accessible route will begin at Tate Britain, where timed entry slots will be issued for those who need it.

When queuers reach the front, they will be directed across the bridge and into Victoria Tower Gardens, before passing through airport-style security to enter the Palace of Westminster.

“People wishing to attend the lying in state, especially those with pre-existing medical conditions, are encouraged to check the guidance, plan accordingly and be prepared for significant wait times, including possibly overnight,” said the government guidance.

“Members of the public are also urged to check for travel updates, plan their journey and check times for last services. People should also check the list of prohibited items as certain items and large bags will need to be left in a bag drop facility, which has limited capacity.”

Guide dogs, hearing dogs and other official assistance dogs will be allowed into Westminster Hall, and British Sign Language interpreters will be available.

Extra facilities along the way

An army of 1,000 dedicated volunteers – including more than 100 Scouts – stewards and Metropolitan Police officers will be on hand to help, and extra facilities will be placed along the way, including toilets and water fountains.

But take advantage when you see them, as staff involved in the logistics told Sky News they were worried there wouldn’t be enough, saying: “There will be queues within the queues to get to the portaloos.

“There might be a lot of crossed legs. I would advise people to have very little liquid. It’s a practical issue.”

St John’s Ambulance will also operate eight stations along the route to provide first aid if it is needed, as well as emotional support from the Samaritans and the Salvation Army.

There will be welfare support from the Red Cross, and Lambeth Palace will also arrange a street pastor multi-faith service.

A number of sites the public will pass, including the Southbank Centre, National Theatre, BFI Southbank and Shakespeare’s Globe, will extend their opening hours around the clock to provide refreshments and toilet breaks to the queuers around the clock, with other local businesses expected to join in.

And the BFI will have an outdoor screen showing archive footage of the Queen throughout her reign.

For those unable to attend Westminster Hall, Sky News will provide coverage throughout the period.

‘She sacrificed so much for this country’

Before the queue route was even announced, people had tried to work out the location route to start their wait early.

He is not expecting to get much sleep overnight – but says it’s worth it to secure his prime spot in the queue.

“I will stay awake all night if I have to,” he told Sky News. “I saw her mum lying in state, I was here when Diana died.

“I have lived in London all my life and I love the Royal Family and what it brings to the country.”

Chris Imafiden, 60, from Essex, began his wait at 9am on Tuesday morning and packed some pastries and drinks to keep him going.

He will be camping out overnight but is not worried about being cold or hungry, telling Sky News: “I’m ready. No sacrifice is too much for the Queen, she has sacrificed so much for this country.”

Mareian Kaewthong, 51, who lives in Wrexham, started queuing a few hours later, and while she brought some snacks, there is no main meal in her bag.

“I have not come here for eating, I have come here to see the Queen,” she told us. “I don’t want to miss the chance to see her, she was the best person ever.”