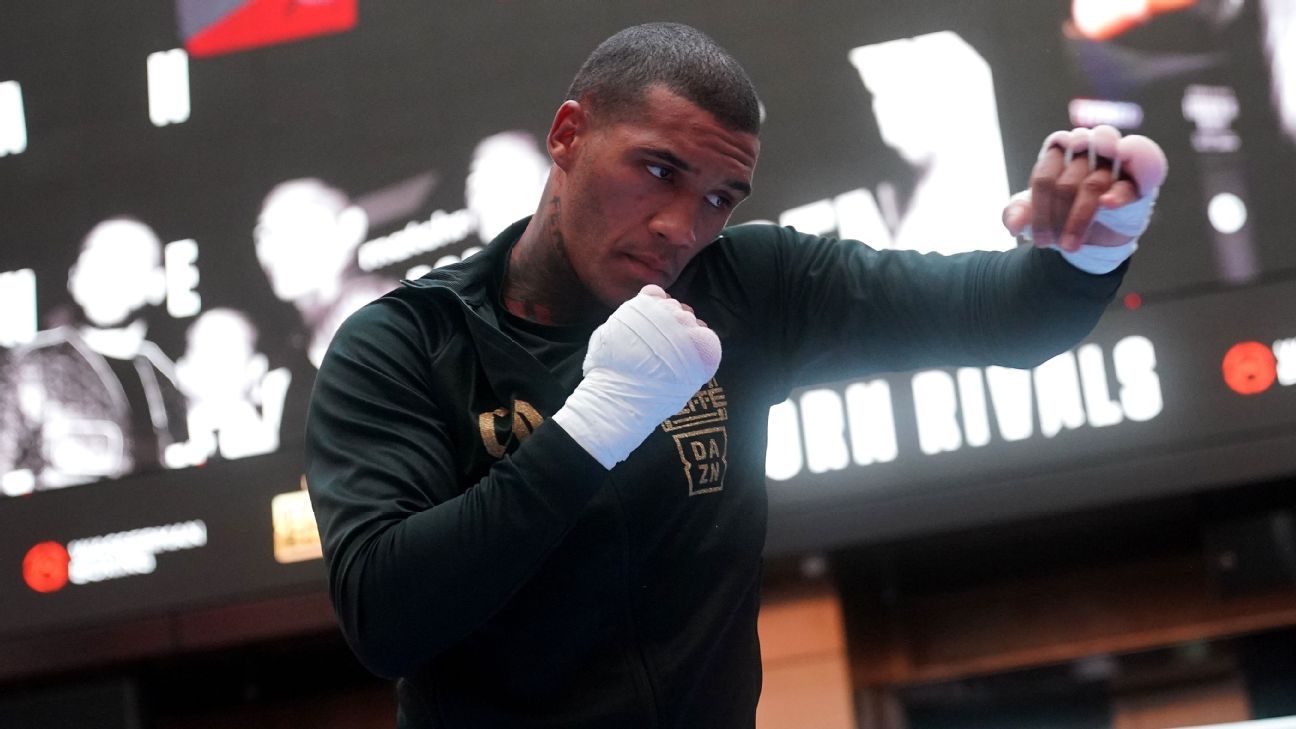 Conor Benn and Chris Eubank Jr. could still fight on Saturday in London as planned despite Benn’s positive test for the banned substance clomifene, which can be used to boost testosterone levels.

The positive test was revealed on Wednesday, and the British Boxing Board of Control subsequently withdrew its sanctioning of the 157-pound catchweight bout.

However, co-promoters Matchroom Boxing and Wasserman Boxing are determined to find a path forward to keep the main event intact on Saturday, sources told ESPN, and are exploring avenues for sanctioning of the grudge match between the sons of British boxing legends.

Since a British title isn’t on the line, they have some options. One avenue that is being explored is through the Luxembourg Boxing Federation. There’s precedent, too. Luxembourg stepped in to sanction the 2012 heavyweight bout between Englishmen David Haye and Derek Chisora after the BBBofC refused to approve it.

Chisora was stripped of his license by the BBBofC after he traded blows with Haye at the news conference following Chisora’s loss to Vitali Klitschko. Haye wasn’t licensed at the time because he was retired.

Another option being explored: the British and Irish Boxing Authority. The governing body sanctioned YouTuber KSI’s pair of bouts in August rather than the BBBofC.

The BBBofC said on Wednesday that the contest was “not in the interests of boxing.” Benn insisted he is a “clean athlete” who intends to go forward with the bout. The co-promoters also attempted to obtain a court injunction to allow the fight to proceed, a source said.

“The B sample has yet to be tested, meaning that no rule violation has been confirmed,” Matchroom said in a statement Wednesday. “Indeed, Mr. Benn has not been charged with any rule violation, he is not suspended, and he remains free to fight.

“Both fighters have taken medical and legal advice, are aware of all relevant information, and wish to proceed with the bout this Saturday.”

Clomifene is banned by the World Anti-Doping Agency, and the doping test on Benn was carried out by the Voluntary Anti-Doping Association, an organization that offers anti-doping testing in boxing and mixed martial arts.

Speaking after his workout in front of the media, Benn said he has not taken a prohibited substance and intends to get to the bottom of the issue.

“I’ve not committed any violations, I’ve not been suspended, so as far as I’m concerned the fight is still going ahead,” said Benn, 26.

“I’ve signed up to every voluntary anti-doping test under the sun, throughout my whole career I’m tested, I’ve always come back negative, I’ve never had any issues before. My team will find out why there has been an initial adverse finding in my test, but as far as I’m concerned the fight is going ahead. I’m a clean athlete and we’ll get to the bottom of this.”

Benn (21-0, 14 KOs) said he had spoken to Eubank, saying his opponent “believes” him when he says he is clean.

“He fully believes, he believes in me, and it’s not who I am, or what I’m about. I’m a pro athlete, and he was understanding.”

Eubank (32-2, 23 KOs) held his media workout shortly after and denied that he spoke with Benn, although the fighter said he remains keen to fight on Saturday.

“I’ve prepared, I’ve done my job, it’s now in the hands of the promoters, the governing bodies, to make this fight happen. All I can do is be ready. Of course, there are concerns, but listen, I can’t really say too much. I just can’t. I am ready, I am a clean fighter, I have cut the weight, I’m ready to go. This is all unfolding.”

Benn’s fight against Eubank — an extension of their fathers’ 1990s rivalry — had been touted as one of the biggest boxing events in the United Kingdom this year, for a reported £3.5 million purse.

Nigel Benn and Chris Eubank twice met for world titles in 1990 and 1993, in two of the biggest fights of the decade in British boxing.

Kyiv mayor’s blunt message to residents after heat and water supplies knocked out for days
Why Silicon Valley is so hot on nuclear energy and what it means for the industry
Tech layoffs send visa holders on frantic search for employment to avoid deportation
Millions flock to mark death of TikTok ‘bones, no bones’ star – Noodle the dog
England cruise past Senegal to set up quarter-final clash with World Cup holders France