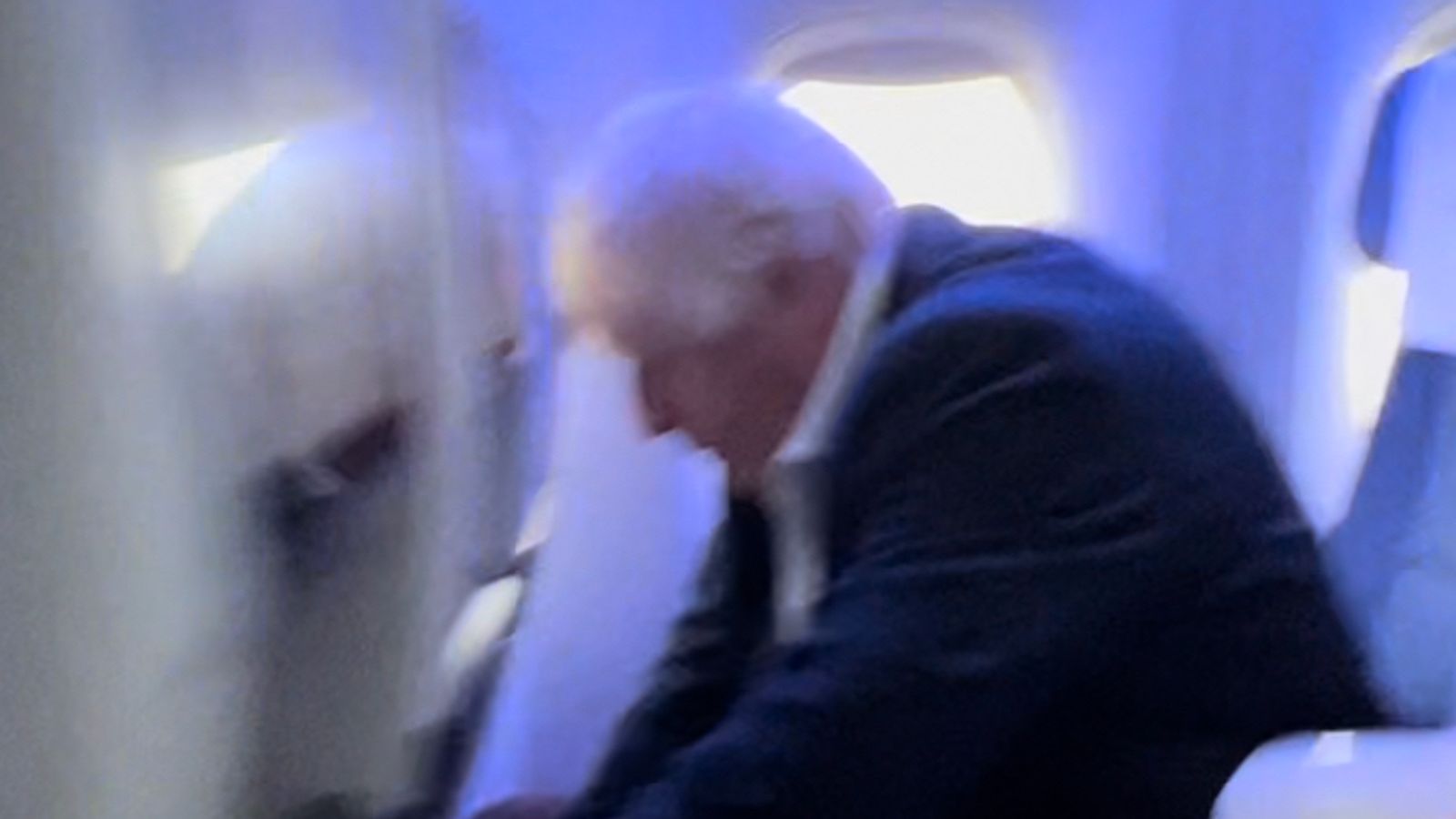 Boris Johnson has been pictured by Sky News making his way back to the UK.

The former prime minister has been on holiday in the Dominican Republic but is set to return to London after telling an ally that he will run to lead the country again.

He is flying back in economy alongside his wife and children, and the picture was taken by Sky’s Michael Herd.

Mr Johnson and his family boarded the plane before everyone else – and according to our US correspondent Mark Stone, there was a “mixed reaction”.

He reports that several passengers looked “slightly bewildered” and there were a few boos, adding: “Mr Johnson is sitting in economy, quite near the back of the plane, with his wife and children – one of his children climbing on top of him.

“He’s in a suit, his head forward, deep in thought, but moments before that one of his children was climbing on top of him – a family coming back from their holidays.”

Our correspondent added that the former prime minister has been in the Dominican Republic for the past two weeks – and there had been much speculation about when he would return.

Boris Johnson spent last night in seat 34K of a British Airways flight from the Dominican Republic back home to the UK.

He’ll land in Gatwick in the next few hours and, presumably, reveal his leadership 2.0 intentions.

Speculation had been rife. Where was the former prime minister? When would he come home from his holiday? Would it be on a commercial flight? Or would a donor provide a jet for Mr Johnson, his wife and their two children?

Just as the Caribbean sun was setting over Punta Cana airport the answer came.

A familiar blonde head of hair was spotted approaching Gate 25.

He and his family were being escorted beyond some glass, separated from the regular boarding area. He wouldn’t have heard the few pantomime boos from others waiting to board the flight.

But this isn’t a pantomime. Britain is in the midst of a political meltdown and, if his allies are correct, then Mr Johnson is coming home because he thinks he can sort it out.

Really? Just weeks after being forced from office, does he think he can provide unity within the Tory Party and a political fix for the country?

His base support among the party and a section of the electorate is deep and loyal. Remember that majority. But remember all the scandals too. And the ongoing parliamentary investigation.

Some of his friends say he’s “up for it”. Is the fact that he’s sitting at the back of the plane, in economy, a hint of his intentions? Man of the people?

Business and premium were not full, and he’d have known he’d be snapped. Fellow economy passengers were positioning themselves for selfies. It’s a reminder that – love him or loathe him – Mr Johnson has star quality. He has a reach that’s beyond most MPs. He’s the Heineken of politicians.

For now he’s not talking, shielded at the back of the plane by close protection officers and by his young children, whose presence rightly puts their father beyond reach for our questions, for now.

Mr Johnson is returning just six weeks after he was asked to resign amid a series of cabinet scandals during his time in Downing Street.

Conservative MP Sir James Duddridge told Sky’s chief political correspondent Jon Craig that Mr Johnson is planning a second bid for Downing Street – saying he is “up for it” and “I’m going to do it, Dudders!”.

Speculation has been growing over whether the former prime minister will attempt to return to the top job.

Mr Johnson is currently one of three frontrunners in the race and has garnered the support of four cabinet ministers. He is expected to officially throw his hat in the ring sometime this morning.

Read more:
Truss urged to forgo PM’s £115,000 annual allowance
We will have a new PM, but it’s hard to see how it stops the rot | Beth Rigby analysis

To have a chance at taking office again, he will need the backing of 100 Tory MPs.

However, he would have to defeat former chancellor Rishi Sunak – and his campaign claims they have already topped that threshold.

Earlier, a Johnson ally said the former prime minister has a “firm 67” nominations.

To register your interest in joining the audience please email TheGreatDebate@sky.uk