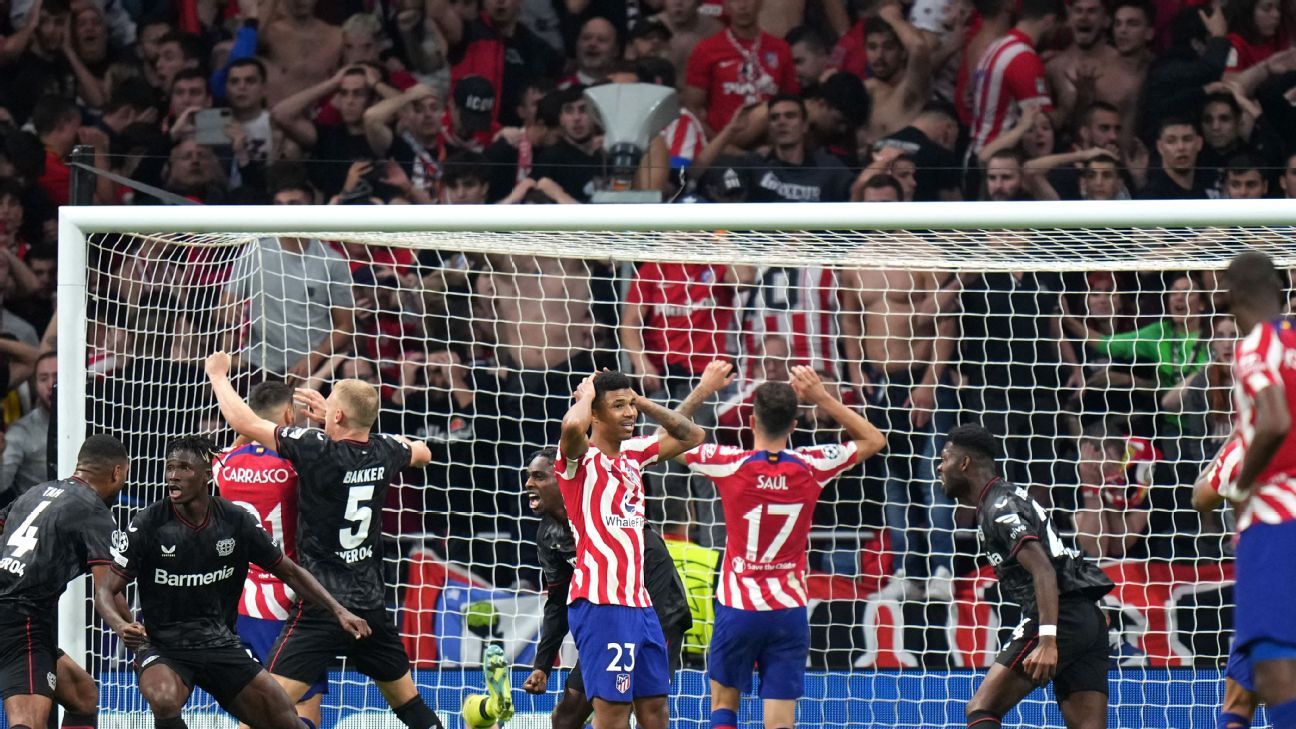 Matchday 5 of the Champions League saw 12 teams qualify for the knockout stages, with plenty of goals, heartbreak and drama along the way. Early exits for Barcelona, Juventus, Ajax and Atletico Madrid will be bitter for those fans and players, while Chelsea and Bayern Munich look like title contenders after finishing as winners of their groups.

After a thrilling first round of games, we asked our writers Gab Marcotti, Sam Marsden and Mark Ogden to answer some of our burning questions.

What caught your attention from Matchday 5?

Marcotti: So much to talk about… the MNM [Messi, Neymar, Mbappe] show in Paris offered plenty of eye candy, Juventus‘ self-destruction, RB Leipzig winning against Real Madrid at the Bernabeu a few days after the passing of Red Bull CEO Dietrich Mateschitz, those wild VAR endings in Atletico vs. Leverkusen and Tottenham vs. Sporting CP … high drama.

Marsden: Even though it was coming after their draw with Inter Milan, Barcelona exiting the Champions League at the group stage will never not be huge news. If last season’s early exit could be put down to a poor squad, such excuses will not wash this year after the €150m they spent in the summer to give Xavi the team he wanted. The early departures of Juventus and Atletico Madrid from the competition was also eye-catching. It means just one Spanish team will be in the round of 16.

Ogden: This wasn’t supposed to happen, but the Champions League is in danger of being overshadowed by — ok, sharing the spotlight with — the Europa League in the second half of the season due to the size of the clubs who are set to drop into the competition by finishing third in their Champions League groups.

Previous European champions Manchester United, PSV Eindhoven and Feyenoord are already in the Europa League and on course for the knockout stages; they will be joined by Champions League drop-outs Barcelona, Juventus, Sevilla and Ajax, and potentially Atletico Madrid, AC Milan, RB Leipzig, and Tottenham or Marseille.

Juve, Barca and Ajax have 11 European Cups / Champions Leagues between them and are all historical giants, but Matchday 5 was a bad night for all of them.

What makes Mudryk and Kvaratskhelia so special as breakout players?

Marsden: Football is about entertainment and unpredictability at the end of the day and that’s what these two players bring to the game, along with quality. However, both have stories you can buy into as well. Mykhaylo Mudryk is representing a Shakhtar Donetsk side who continue to compete despite Russia’s invasion of Ukraine. Khvicha Kvaratskhelia, meanwhile, had to leave Rubin Kazan after Russia’s invasion before winding up at Napoli via Dinamo Batumi in his native Georgia.

Marcotti: I think they’re somewhat different in that Mudryk simply didn’t play very much and was not as highly regarded as a teenager but really came on strong in the past 12 months. Plus, of course, he plays for a club in a war zone, which adds to the whole backstory.

Kvaratskhelia got a lot of attention from a young age and spent several years in a competitive league like Russia. The knock on him was always about his end product, but scouts loved his technical ability, strength and competitiveness. He’s just a one-man highlight reel. Mudryk is more elegant, more refined in some ways and, maybe, has a higher ceiling.

Ogden: They’re both exciting attacking players, still relatively unknown on the European stage, but they have been outstanding throughout the group stages. One interesting element is that they are both from eastern Europe, a huge region which has seen its talent stream dry up in recent years compared to the greats it has produced historically.

Ukraine (Mudryk) and Georgia (Kvaratskhelia) formed the backbone of the most powerful Soviet Union teams, while nations such as Romania and Bulgaria contributed great players like Gheorghe Hagi and Hristo Stoichkov. It’s been more than 20 years since Ukraine’s Andriy Shevchenko became the last great player from that corner of eastern Europe, so if Mudryk and Kvaratskhelia are leading a new wave of talent, it’s good news for the game.

Gab Marcotti examines what the future holds for Massimiliano Allegri an Juventus after the club failed to reach the UCL knockout stage for the first time since 2013-14.

Of the teams qualified for the knockout stage so far, which ones do you think will go furthest based on current form?

Ogden: Let’s get this straight, current form is completely irrelevant as a guide to who might win the Champions League — group stage performances are never a pointer for the knockout stages and with a World Cup getting in the way this season, it means even less this time around.

Teams with impressive records now may have had an easy group or simply peak too soon. Liverpool have been hammered by Napoli, while Manchester Cityhave failed to score in their last two away games, but both are as likely to win the Champions League as Bayern Munich, who have won all five group games. So my tip is Liverpool Yes they have flaws in midfield and defensively, but that was the case last season and they reached the final. They have the goal scorers to go all the way again.

Marcotti: I agree with Oggy, current form doesn’t matter, March/April form matters. But if you’re asking who looked best in the group stage, well it has to be Bayern and Napoli who are perfect. I think City also looked good, despite their two draws. If you want to know who I think will win it and whether the group stages changed my opinion, I still see City, Real Madrid and Bayern as favorites, with PSG, Liverpool and Napoli a notch below. I guess from the original pool of potential winners you can take out Barca (for obvious reasons) and add Napoli.

Marsden: The usual suspects. Real Madrid have been accused of being lucky in recent seasons when winning the Champions League, but this time around they have a great squad and look potential winners again. Bayern have also made light work of a tough group, winning all five games so far, and will be keen to make up for last year’s surprise exit to Villarreal. I would say City are also on a part with those sides. Napoli have been the most exciting team so far but let’s see how their form holds in the knockout rounds.