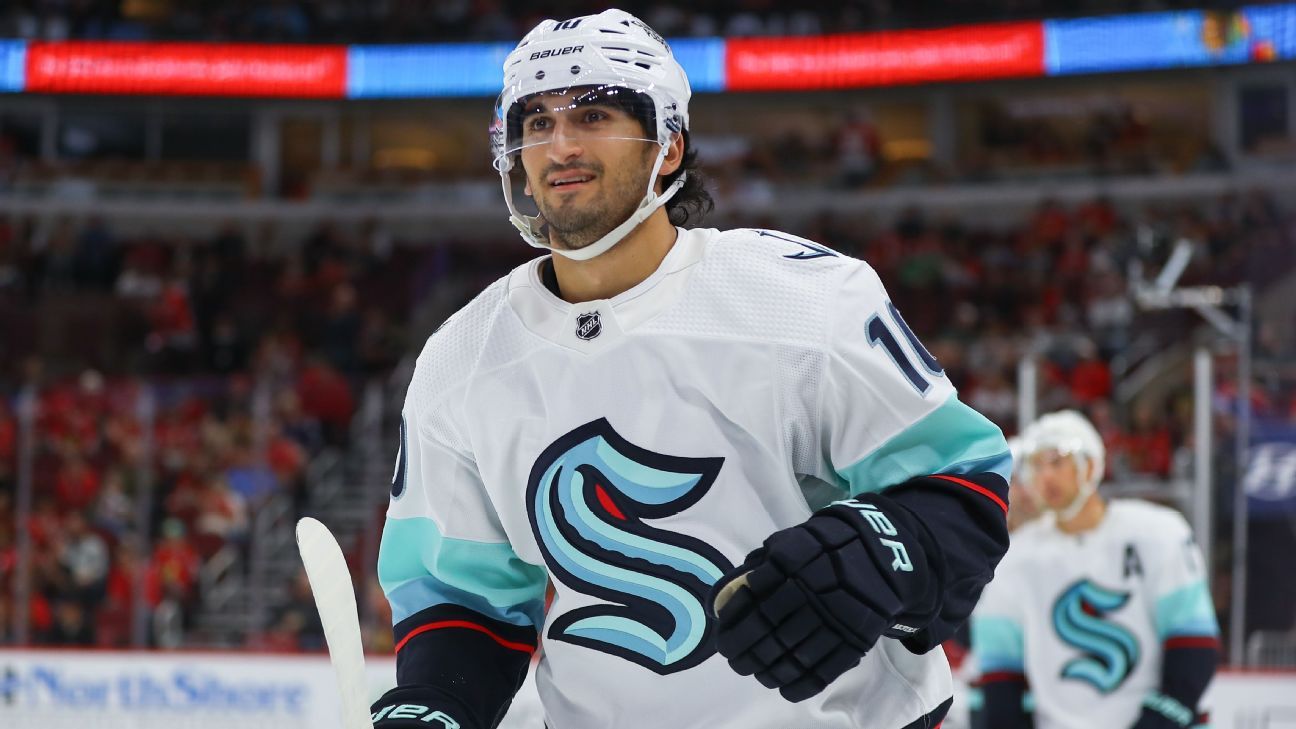 Four wins in their first six games while also holding the distinction of being the NHL’s youngest team. That is what it means to be the Buffalo Sabres at the moment.

A number of items have brought the Sabres to this point in the opening weeks of the season. One of them is the trust coach Don Granato continues to show with his young players. Rookie forward JJ Peterka and rookie defenseman Owen Power are examples.

Peterka has used his brief time with the Sabres to show he could potentially be counted upon as a secondary scoring option. His four points are tied for fourth among rookies, and he is doing it while averaging more than 12 minutes per game.

“I think getting the trust from the coaches is something that comes through work ethic,” Peterka said. “If you bring that every day into practices and into games, you can earn [trust]. But you also have to prove yourself if he puts you out there.”

Then there’s Power, who was the No. 1 pick in the 2021 draft and projects to become a two-way defenseman with size who can be used in every situation. Power leads all rookies with 22 minutes, 44 seconds in average ice time and is one of only three rookies to average more than 20 minutes this season.

“It gives me the confidence to go out and play and not really worry about anything,” Power said of the trust that Granato has shown. “Playing those minutes has really helped me a lot and has made the adjustment a little easier.”

Why he’s here: Even as a rookie, Beniers is already a top-line center. His offensive contributions have him in a three-way tie with Calen Addison and Shane Pinto for the most points (six) among first-year players. Then there is what he means to the Kraken. Alex Wennberg is the only Kraken forward with more ice time than Beniers. He’s tied for second on the team in goals, tied for third in points and leads the Kraken in power-play ice time.

Going forward: To have a two-way, top-line center is what made the Kraken take Beniers with the second pick in the 2021 NHL draft. They are already seeing the offensive returns while the defensive aspect of his game is starting to take shape. Beniers is third on the team in defensive zone starts and is sixth in defensive zone faceoffs in 5-on-5 play. But he’s also been on the ice for eight goals in 5-on-5 sequences, which is tied for the most on the team.

Why he’s here: Sanderson’s early returns are showing he can do whatever is asked of him as a top-four defenseman. He’s third on the Senators in minutes. He is on the second-team power-play unit and he is already on the penalty kill with the fourth-most minutes on the team. Sanderson also has held his own in 5-on-5 sequences. He’s been on the ice for three opposition goals, which is the second-fewest among Senators defensemen with at least five games this season.

Going forward: While he is still waiting for his first goal of the season, Sanderson has three assists in six games. His puck-moving ability — along with the fact he can be used in numerous situations — is setting Sanderson up to be one of the Senators’ strongest contributors.

Why he’s here: Thompson is part of a tandem with Adin Hill that is expected to help the Golden Knights return to the playoffs after missing the postseason last year for the first time in franchise history. So far, Thompson has made five starts with a 2.03 goals-against average and a .931 save percentage. His starts are the most among rookie goalies, while his GAA and save percentage are second among first-year netminders.

Going forward: Naturally, there are the questions about how Hill and Thompson will perform throughout a whole season. So far, they have combined to go 6-2 with a collective 2.00 GAA and a .932 save percentage. But what will happen with Vegas’ goaltending dynamic when Laurent Brossoit is healthy?

Why he’s here: Any questions about the health of his once-injured shoulder seem to have been answered. A five-goal game streak to start the regular season opened the door for Pinto to become an early entrant for the Calder race. He is tied for the most points (six) among first-year players. Furthermore, his five goals lead all rookies and he’s tied with Brady Tkachuk for the most goals on the Senators.

Going forward: The news that Josh Norris is expected to be out long term could mean there is a chance for Pinto to earn more opportunities. Pinto is the team’s third-line center and is averaging 14:48 in ice time. He is also receiving regular power-play time. Pinto could push for more playing time and continue to give the Senators another offensive threat.

This season will include 103 exclusive regular-season games across ESPN, ESPN+, Hulu and ABC. More than 1,000 out-of-market games will be available to ESPN+ subscribers via NHL Power Play on ESPN+.
• How to watch
• Subscribe to ESPN+
• Stream the NHL on ESPN

Why he’s here: Guhle is the youngest member of the Canadiens’ defense and is already among the team’s most productive options. He is serving in a top-four role while ranking third on the team in short-handed ice time and second among Habs defensemen in power-play ice time. Only teammate Jordan Harris and Power have averaged more minutes among rookies than Guhle.

Going forward: How Guhle continues to develop is important for this year and beyond, particularly when one considers the Canadiens’ defensemen have an average age of 25.6. But if there is a concern, it could be puck possession in 5-on-5 sequences. Guhle’s shot-attempt percentage is 39.8. That is the second-lowest figure on the team next to his partner, David Savard, at 37.07.

Why he’s here: Perfetti is in a tie for fourth in rookie scoring and is two points away from being tied for the lead. He stands out even more among his teammates, as Perfetti was tied for the lead among all Jets forwards in points through seven games.

Going forward: Perfetti is three points away from surpassing what he did last season before he suffered a season-ending shoulder injury that limited him to seven points in 18 games. Having another offensive option would be a big benefit to the Jets. They are 21st in scoring chances in 5-on-5 play, 21st in high-danger scoring chances in 5-on-5 play and are 25th in high-danger goals.

Why he’s here: Power is playing a lot. That much is clear. As of the middle of the week, he ranked 35th in minutes among all NHL defensemen. That gives the Sabres the distinction of having two defensemen — Rasmus Dahlin and Power — who are averaging more than 22 minutes per game this season.

Going forward: Where it gets complicated is how Power is impacting the game. On one hand, he leads the Sabres in 5-on-5 ice time. That said, Power has allowed the most shots, scoring chances, high-danger chances and the second-most high-danger goals in 5-on-5 play on the Sabres’ roster. But his usage also means he is receiving second-team power-play minutes and has factored into the penalty kill with the fifth-most minutes among Sabres defensemen.

Why he’s here: Harris’ ice time and what he has done with it has led to his strong start. He has become a top-four defenseman and leads the Canadiens in 5-on-5 ice time. He has also worked his way into the penalty kill, as he is fourth on the team in short-handed minutes. Harris also is fourth on the team in defensive zone faceoffs and defensive zone starts in 5-on-5 play.

Going forward: Seeing what Harris does with the offensive part of his game could be something to monitor going forward. He averaged 0.56 points per game during his four years at Northeastern University. This season, he has only one point in eight games. But he does have 19 shots on goal in eight games.

Why he’s here: Addison is something of a curious case. His offensive contributions have made him a standout. He is tied for first in points among rookies and he is third on the Wild in points. He is also averaging 17:19 in ice time. Plus, he is in the top 10 in points among all NHL defensemen.

Going forward: But … The defensive side of his game comes with questions. He entered Thursday 11th in 5-on-5 ice time among first-year defensemen with 68:22. And while he and Guhle are tied for the most 5-on-5 goals allowed, the difference is Guhle has played 114:12 in ice time. That, and Addison is 42nd in 5-on-5 defensive zone starts and 51st in 5-on-5 defensive zone faceoffs among this year’s rookie class.

Why he’s here: Johnson entered Friday on a four-game points streak that has led to him being tied for fourth in scoring with Perfetti. Of note are that his contributions have come with Patrik Laine injured, giving the Blue Jackets another option to fill that void.

Going forward: A potential obstacle for Johnson could be the team figuring out how to parlay his production into receiving more playing time. He is averaging 12:37 in ice time and that is the third lowest on the Blue Jackets’ roster. But he is also contending for playing time on a team that already has Johnny Gaudreau, Boone Jenner, Gustav Nyquist, Jack Roslovic, Jakub Voracek and Laine occupying those potential extra minutes.

Ask the Union Leaders: Should rail workers get a pay rise if services aren’t improving?
Time magazine reveals its 2022 Person of the Year
AO first sensory inclusive international event
Jamie Dimon says Ukraine war shows we still need cheap, secure energy from oil and gas
UK ‘is already in a recession which is expected to last into next year’